“I hereby make the simple promise that whenever I purchase new clothes, I will ask the responsible retailer or store representative where, and under which circumstances, the clothes were produced.”

This is a promise everyone visiting the Fair Fashion Lab [The Hague, NL] [1] could make and sign. Formulated by artist Arne Hendriks, winner of ‘Best Future Concept’ at the Dutch Design Awards, this work touches upon the burden that has been brought onto the act of consuming fashion today. Nervous coughs and awkward pauses amongst those who buy and wear clothes [everyone?] not rarely interrupt attempts to talk about fashion consumption. It is not a favorite topic at a party and the fragmented information we can attract [with effort] only occasionally forms a solid base for conversation. It seems that a gap between us, the public, and the object, has been formed that is difficult to bridge. And we know it. Although seemingly inseparable, the two have slowly grown apart. Did we let this happen? And what are the circumstances which have contributed to this result?

The first and major aspect that contributed to this relational loss can be found in Public Relations. From the 1920’s onwards, the American nephew of Sigmund Freud, Edward Bernays, radically changed all our minds with an articulate, wide-spread propaganda to want things we didn’t need, called PR. Using his uncle’s psychoanalytic insights and the power of war speech to create a global system of manipulation, he created commerce as we know it today [check the documentary ‘The Century of the Self’] [2]. Nearly one hundred years later, our main focus still is the fulfillment of desire, which has slipped into our subconsciousness ever since. We have learned to consume ideas through commodities. And, in the case of fashion, additional power comes to the objects we want to own.

There is such a thing as fashion logic, with its own influential rhetorics that tends to close the circle on the act of consuming. This in itself formulates yet another circumstance that has kept us in the void. Clothes have the ability to promote individual messages through mass produced and, more recently, mass customized items. For centuries long, the ‘fashion system,’  as it is often summed up, has emphasized systematic consumption and thrived on seasons and hierarchical connotations of status. Because of this ‘natural’ commercial success, many other fields happily appropriate its production segments and visual signs. In the first publication that took fashion as an international subject beyond classical notions of beauty, ‘The Power of Fashion’ [ArtEZ Press, 2006] [3], French philosopher Gilles Lipovetsky declares that recently, fashion logic has expanded to every industry and every way of communication. Fashion, media, art and even politics have to look nice in order to have a public say. Not only envisioning Bernay’s prophesy but also extending it, he states that we’ve upgraded into hyper-consumers that are now constantly captured by fast aesthetics. The job-hopping designer and the status that comes with him/her as creative representative of a label, the ever changing designs and the switching investors, producers and working locations all contribute to the extremely temporary visual seduction that is inherent to fashion and has infiltrated non-fashion markets globally.

The fact that fashion’s capacity to ‘shout and leave’ is popularized, makes it a third reason why we have lost our grip on our role as consumer and strengthens the need to restore it. The more fashion’s ways are used to brand [and sell] every aspect of our contemporary society, the harder it becomes to make a division of reason. Our sense of responsibility has changed. Pressing matters concerning lower resources and poor working conditions of textile workers amongst others, show that a more urgent reaction is demanded today than in the past. Yet, self-admittedly we have to discover that an overall ‘slacktivsm’ has taken over. This term was coined a few years back to give meaning to a new phenomenon: the growing number of people who pretend to care and pretend to perform efforts for change. While it is generally agreed upon that if we are all just a slave of fashion there is no chance of change setting in, actions indicate otherwise, as not a lot is done around this understanding. We could conclude that at the moment our ethics seem as outsourced as our aesthetics.

It is the fragmented production of fashion that creates the negative sum of it all. Here, we could state that the large number of locally produced and purchased ‘fakes’ in the emerging economies of Brazil, Russia, India and China make a plus one for their part in the fashion waste. And when looking at the geography of Do-It-Yourself practices and recycling initiatives, it can be said that the rare positive actions are well spread over the world. Whether a bodysuit knitting atelier in China [by artist Movana Chen] or a sewing workshop in Istanbul [Otto von Busch and Oda Projesi] [4], actions like these can give back to us a sense of control and choice. On the latter’s website, Busch states that by hacking the fashion system “imagination, an affirmative and seductive play with the possible, may re-circuit the forces of fashion into something else than today’s circular prison.” This touches upon the essence of our role as a consumer, which has become one that is similar to that of a tourist. Sociologist Zygmunt Bauman, who has intensely studied the effects of current conditions on our contemporary way of living, has come to the conclusion that today we all suffer from the ‘tourist syndrome.’ In a namesake interview [5] with colleague Adrian Franklin he acknowledges the all-intersecting, continuous state of not-belonging: a “looseness of attachment” with everything and everyone. We knowingly move around the world without connecting to a place and move between objects that can be replaced at any time.

As a result there came such a thing as over-consumption, the guilty subject we all try to avoid. In the last ten years a true ‘fashion inflation’ [6] has even been signaled, more than doubling the usual price, having to do with the rising costs of materials, retail estate and marketing strategies. Luckily conversation habits are changing and today the number of attempts to develop a durable approach against ‘bad consumerism’ have grown. A designer like Stella McCartney is often mentioned in relation to comfortable designs and ethical production considerations. What is overlooked however, is that in reality the label still mainly flourishes on the status of exclusivity in both price and location. A notion not yet sunken in in the world of fashion, is that instead of either/or, it can be both/and. “There doesn’t have to be a divide between profit and value,” philosopher Alain de Botton states in the article ‘Business and Philosphy’ on the liberal blog Huffingtonpost.com. A new way of ‘understanding your customer’, De Botton explains, can be found in developing a less volatile base by setting out roots in the client’s psychological and natural needs. [7]

In order to deepen the relational aesthetics of fashion, and get back in touch with our psychological and natural needs, we have to reformulate the position-in-the-middle. The new demand to raise engagement with the people in fashion and with the objects of fashion has to be met. Generally people love fashion, but does fashion love people? That one happy consumer which makes ten people miserable along the way is not a fixed given. By creating connections within fashion that go through cultural, geographical, disciplinary and generational boundaries, a broad understanding to current consumerist thought can be given. The consumer no longer can be a mere witness but must be turned into a committed actor. Fashion curators, writers and daring designers who are already working ‘in between’ are paving the way by shaping a new space for fashion consumption. Physical, verbal and virtual interventions can change the experience of fashion. Ultimately, fashion can be related back to the public. 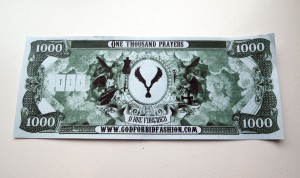 [2] The Century of the Self <http://thoughtmaybe.com/the-century-of-the-self/>

Bio
Anna Elisabeth Kruyswijk is art historian and research curator. She is Master Fashion Strategy [ArtEZ], holds an MA in History and Theory of Architecture and a BA in Art History [Leiden University]. Initiator of The Fitting Room Projects .